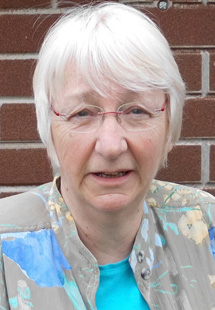 This was the part of his job that Ken most enjoyed – the opportunity for silent contemplation. The preparation was done. The T’s were all crossed and the I’s dotted. Now, as he stood in silence looking down the nave of the church, he felt that same sense of tranquillity – that feeling of time-waiting that an empty church always gave him. He stood perfectly still and watched the motes of dust dancing across shafts of sunlight. He breathed in the essence of the place, the aura of agelessness, of generations past and yet to come. He took in a deep breath and, for that moment, the stillness of the air enveloped him and he felt safe from the perils of his world.

This was the church that Stanley Murdock had specified – St Etheldreda’s. It was a church that Ken had always loved – even after he had lost any belief in a god or an afterlife. He regularly came to concerts here, and wondered if he would ever be able to appreciate its beauty after Stanley’s funeral. He knew that it would be his choice whether he allowed Stanley’s ghost to haunt him, in this place or any other.

He surveyed the funeral flowers – purple and white – hung at the end of each pew. He took a deep in-breath. There were no lilies, as Ken had specified, and the faint perfume of freesias and sweet peas wafted around him in pleasant undertones. The order of service booklets were stacked in neat piles at the back of the church. They were fatter and more ornate than was usual, including, as they did, the words of the many readings and hymns that Stanley had specified.

Stanley’s coffin stood at the front of the church – bathed in flowers and ultra-ornate coffin furniture. Ken had buffed the handles until they shone like fool’s gold. To some this would seem like a display of wealth; a sign, as with the ancients, that this man had been important, and so took adornments with him to smooth his path into the underworld. To Ken it looked vulgar. He had the feeling that Stanley’s passing – if it were to be into an underworld – would need a lot of smoothing. But he realised that his opinion of the opulence of the funeral might have been biassed by his opinion of Stanley.

Ken heard a soft, swishing sound and looked up. A figure was edging into place at the organ. From this distance he resembled a giant bat, until Ken realised that he was wearing an academic gown. Stanley had specified the organist, a renowned musician and a fellow of St Etheldreda’s College. With some difficulty, Ken knew, this famous man had made himself available. The organ pipes wheezed into life as the organist began the repertoire that Stanley had ordered. Ken looked at his watch. The service would not be starting for half an hour but it was usual for mourners, plus any passing tourists and interested onlookers, to arrive early.

Perhaps the music had been the signal, but now the empty church had begun to fill. Ken nodded a further greeting to the six sturdy pall-bearers he had employed. They were regulars and knew their part well. They were keeping a low profile, melding into the darkness at the back of the church until their time came to remove the coffin to the plot in the churchyard beyond. Ken took his place at the main doors beside Maurice and Katy and began to hand out orders of service. He could see that a few people were entering through a side door – one that had previously been locked. In order to ensure that they had service booklets, Ken took a handful and advanced, with decorum, to the front of the church. The ‘side door people’ had begun to fill the first row of unreserved seating. The three men knelt with heads bowed and grunted in response to Ken’s suggestion that they might like an order of service. They grudgingly took the booklets and muttered something unintelligible, all the while keeping their heads down.

Ken retreated to the back of the church and motioned to Maurice. Maurice spoke in a low voice. ‘Press photographers out front. Reckon they’re camera shy. Bet they leave the same way.’

Ken surveyed the other participants – he couldn’t call them mourners. Professor Daniels was there in full academic dress – sitting at the front as though he was family. Typical, thought Ken. He’d always been super-confident, even when I knew him. Daniels was talking to the man sitting next to him. Ken didn’t recognise him. Others we turning, talking all around them. That brought a distinct buzz that was not altogether usual at a funeral. Under the cover of the music, people were chatting quietly, tapping each other on the back. It looked as though they were renewing old acquaintance. Ken decided that it was more like a wedding than a funeral. He looked at the congregation and could see not one sad face.

At the appointed time, Lucien, Virginia and Alistair Murdock made their appearance. Lucien led the other two to the front of the church. No deference and decorum here. They strode to the front in quick time, heads held high. United, Ken thought, in their desire to get their father deposited in the ground with what might seem indecent haste. Indecent – if you hadn’t seen the contents of the three envelopes that Stanley had wanted to go with him to his grave; the contents which were supposed to be residing in the coffin with him, the contents that showed, with clarity, how Stanley had manipulated and subjugated his three offspring. Only Ken knew where Stanley’s paperwork was – and it was not in his coffin. Ken also knew that keeping it could be dangerous – but he had a niggling belief that Stanley’s story hadn’t finished with his death. The trouble was, he had no idea where that story might lead.

Ken looked round to see if Josephine had arrived. He was disappointed not to see her. He had expected her to be here. He did notice a nondescript figure slip into the church at the final minute and melt into the background. Ah, thought Ken, that must be Chris – the spy. Then the Minister appeared centre stage, the organ belted out ‘Onward Christian Soldiers’, the congregation rose as one and the service began.

‘Bloody hell, I’m knackered.’ Katy took off her hat and laid it on a table, spreading the chiffon trails with care. Then she kicked off her shoes and fell backwards on to the settee. ‘What a day. No hiccups, thank God. And was anyone sad to see him go? I don’t think so! Not one long face among them.’ She turned towards Maurice and patted the cushions beside her. ‘And did you see those heavies from Northern Ireland? They were sooo scary.’

Maurice sank down beside her and stretched his legs in front of him. ‘Yeah – a bit incongruous seeing them mixed with the great and good. There was some really high and mighties there. And them “heavies” was right alongside the high-ups. The good, the bad and the ones who was very, very ugly.’ He took off his shoes and rubbed his feet. ‘Sorry ’bout the smell – but my feet are killing me.’ Ken and Katy wrinkled their noses but said nothing. Maurice continued, ‘Did you see that politician – whasisname? You know, the one caught with his fingers in the till. And that TV presenter with the orange face – not a pretty pair.’

Ken looked at his daughter and his uncle slumped on the sofa. ‘No staying power you two. I’m going for a run. The best way to get rid of adrenalin. Anyone fancy a jog to Lammas Land?’ He could tell by their looks that there were no takers.

Maurice ignored Ken and continued with his tale. ‘Did you see them ugly buggers – clever how some of ’em managed to dodge all the cameras. Hats over their faces – and Katy, did you see them ones as went in the church by the side door? I reckon they must’ve organised that with the minister beforehand. Hey, though, I’m sure some of them shy ones was undercover police. They had that look about ’em. You get to know it after a while. They wouldn’t have wanted to have their cover blown.’

Katy suddenly clapped her hands and laughed. ‘D’you know, I thought some of the waiters were a bit off. Of course – they must have been in disguise. It would be a really good way to earwig. No-one sees waiters, do they?’

Katy looked coyly at Ken. ‘And Josephine looked stunning. I bet you didn’t notice, but black really suits her.’

Maurice chimed in, ‘See how she charmed them uglies. She made sure she talked to all the “bad boys”. I think she was making sure she kept them in order – so they wouldn’t kick off. Now, if she joined the firm, even the dead would sit up and take notice.’ ‘Stop right there, you two. Don’t get ideas. We’ve been for one drink.’ He tapped
the end of his nose. ‘So mind your business both of you!’

Katy grinned. ‘Oooh must be going well – he’s got that secret smile again. Anyway Dad, do we have a day off now Stanley’s safely stowed?’

‘You should be so lucky, my girl. We’ve got somebody coming in tomorrow and we’ve got to earn the rest of our fee from Stanley. Even with all the trimmings he ordered we’ve got some way to go. I’ll start with his cousin. A pity they wouldn’t let him out for the funeral. I’ve arranged to see him on Friday at Highpoint and I’ve got to find out the etiquette of prison visiting. And, if my luck’s in, I might just discover why Stanley was murdered.’