The Taxi Driver – by Angela Wray 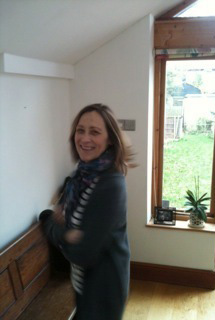 Leila slipped through the hole in the fence and looked around. How strange, she thought, that this garden could be so completely different from her own – no climbing frame, no swing hanging from the big branch of the apple tree; in fact no apple tree at all, just a gnarled old plum with fruit just beginning to ripen, and a few enormous, unkempt rose bushes. Leila breathed in the deep, spicy scent of the roses and decided she would pick one on her way out if no-one was looking, to add to the concoction in the jar under her bed that she was hoping would one day, by some mysterious process, turn into perfume. The neatly planted roses in her own garden did not have such a powerful scent as these wayward giants, but were controlled and colour-coordinated, with little tags dangling from their necks to remind you of their names: New Dawn, Queen Elizabeth, Canary Bird. Canary Bird was definitely Leila’s favourite, not just because of its name which was almost, but not quite, as nice as having an actual canary in the garden, but also because its bright little yellow flowers draped satisfyingly round the back door and grew up almost to her bedroom window despite her father’s efforts to tame it with green twine and lengths of twisted wire.

She had come home from school and, after making a cup of tea for her mother, had spent an hour in her bedroom creating patterns with her Spirograph before going downstairs to watch Blue Peter. John Noakes had talked about exploring gardens, which, as far as Leila’s garden was concerned, was impossible as there was just a big square lawn with flowers round the edge and the apple tree. She knew every inch of it already. That was when she’d had the idea about next door.

She ventured further, tiptoeing through the damp grass that, unlike the lawn in her own garden, was long and wavy. She loved the tickle of the grass as it brushed her bare legs, and reached down, stroking the soft blades with her fingers. A grasshopper leapt up from under her hand, startling her. She stood up straight and looked towards the house, the house next door to her own where she had lived for eight years, her whole life. It was exactly the same size and shape as hers, but where hers had fresh white walls with clean white net curtains at the windows, here the dull red brick was unpainted, and the grimy windows seemed to stare out at her like an unwashed face. She thought it had a rather sad air about it, and it looked…well, a little bit unloved. She wanted to go into the house and tell it that she for one loved it, especially the garden which was so much more interesting than the neat patch next door that her father tweaked and fussed over every evening and every weekend.

This is a place where I would like to play, Leila thought. I would make up stories about elves stealing the plums from the plum tree and eating the eggs from the robins’ nests (a man had come into school to tell them about birds and their nests; since then Leila had spent a lot of time looking for nests in her own garden, but it seemed it was not the type of garden where birds wanted to build nests, and she was almost sure that this particular garden was).

A cat, sitting at the edge of the path that led to the back door, eyed her with an unblinking stare. Leila approached it, stretching out her hand tentatively. The cat did not move and Leila realised that it was a dummy, a pretend cat. She knelt down to stroke it all the same and thought how lifelike it seemed with its gorgeous thick ginger fur and pretty green eyes. She stroked its eye which was shiny and hard, and then, out of curiosity, tried to stroke her own. A painful mistake, she immediately realised, as her eye reacted to the violation by shutting and watering copiously.

“Careful, pet, you’ll do yourself a mischief.” Leila looked up through a blur of tears. A very old man stood at the back door, one hand resting on the frame. He stepped out and reached down a hand to Leila to help her up. Then he pulled a large white handkerchief from his pocket and offered it to her. She took it and mopped up the tears and the snot which was also dripping down her face. The handkerchief smelt of old people, a bit cabbagey, but it was very nice of him all the same and Leila smiled.

“Thank you.” She held out the wet handkerchief and the man took it and stuffed it back into his pocket. She looked at him. He had a kindly, happy face with thick white hair and a white moustache a bit like her grandpa’s.

“You’re Leila from next door aren’t you? I often hear you and your dad out there in the garden. How’s your mother these days?”

“Ever get out, does she?” The man seemed to know Leila’s family even though she was sure she’d never seen him before.

Leila shook her head. “No,” she said. “She stays in bed. The doctor comes sometimes.”

“Oh dear, poor thing. Well, give her my regards when you go back. Time for a glass of orange before you go?”

“Yes please,” said Leila, who was very partial to orange squash. Her father would only buy lime juice cordial because he said it was better for you, but as he was the only one who drank it it wasn’t better for her. The man led the way into the house.

Leila stood in the kitchen and watched as he poured their orange squash into two glasses and produced a packet of custard creams from the cupboard, which he put on a small wooden tray.

He led the way through to the sitting room, where an old woman was sitting asleep in an armchair, her hands and feet neatly crossed, glasses perched on the end of her nose, her hair tidily arranged in a bun. She reminded Leila of a story she’d just been reading about a lady called Mrs. Pepperpot.

“Won’t your wife want some orange, too, when she wakes up?” she asked the man.

“No pet, she won’t.” The old man put the tray down on a side table and sat down in the other armchair.

Leila sat on the sofa and took a biscuit from the offered packet, nibbling it all round the edge to save the delicious creamy filling to the end.

“That’s just the way I eat them too,” said the man, and they nibbled away in silence. Leila liked the old man, she decided, and she was sure she’d like his wife as well when she woke up.

“Where did you get your cat?” she asked, thinking that she would ask her father if they could get one too, since pets, she had been firmly told many times, were out of the question.

“Well, I know this is a funny thought, but he was a real cat once,” said the man, smiling. “His name was Binkie. Silly name, I know, but he was named after someone in a book that my wife had just finished reading.”

“I don’t think it’s a silly name,” said Leila. She had now separated the two halves of her biscuit and was eating the top section. “But how can he have been a real cat and then now he’s just a pretend cat? That doesn’t make sense.”

“His fur is real. He had the most beautiful fur, and wonderful green eyes, and he was such a lovely cat that we decided to keep him when he died. The eyes are glass, sadly; you can’t save the eyes.”

“But when something dies it dies, doesn’t it? You have to bury it, or something else where you burn it – that’s what they did when my granny died.” Leila was fascinated now, leaning forward as she licked the custard filling off the bottom half of the biscuit.

“Cremate, yes; when it’s a person you usually bury them or cremate them. But you see, pet, when you have an animal that dies you can have it stuffed by a special person and then you can keep it for ever.”

“That’s nice,” said Leila, looking around the room. “So do you have any other animals like that?” and she explained that she thought her father might let her have a stuffed animal – “He says proper animals are dirty and smelly and need too much looking after and would do their business on the grass.”

The man chuckled. “Well, that’s true, pet, they would. They haven’t learnt to use the toilet like you and me. And your dad must be very busy looking after you and your mother and that garden when he gets home from work.”

“I suppose so,” agreed Leila, looking longingly towards the biscuit packet. “Thank you,” she said as the man passed it over. He took a second one himself, and the nibbling process began again.

“Leila! Leila! Where are you?” Her father’s voice sounded anxious. Leila stuffed the biscuit into her mouth and leapt up.

“Yes, thank you for the orange and the biscuits. And…um…can I come again? I like your garden and your cat, and…”

Leila dashed out of the house and ran down the garden and scrambled through the gap in the fence.

“Hello, Daddy, just been to see the people next door. They’re really nice and they’ve got a cat called Binkie and…”

“What, old Mr. and Mrs. Briggs? Haven’t seen them for years.”

“Yes, and Binkie used to be a real cat but he isn’t any more. He got stuffed by someone.”

“Oh of course, now I remember. Old Briggs used to be a taxi driver.” At least, that was what Leila thought he said, but by now she was too busy climbing the ladder of her climbing frame to carry on the conversation. “Well, if you go and see them again,” continued her father, “Just leave a note in the kitchen or tell your mother where you’re going so that I don’t get home and find you missing, eh? Be a sensible girl.”

“All right,” said Leila, hanging upside down so that her hair swept the grass.

She often went into Mr. Briggs’s garden after that, and she and the old man would drink orange juice and eat custard creams together, and sometimes she would sit on his wife’s knee and stroke her peaceful, sleeping face.